After a great New Year's feast with good friends, New Year's Day was a quiet day at home watching TV and reading.  We enjoyed the down time and a day without commitments and 'to do' lists.

I read about an upcoming meteor shower, and it didn't take much to convince us to get up at 2:30 am on Wed. morning and head into the country to watch the show. We parked the car, opened the sun roof and leaned back to watch the sky. Quiet of traffic, noise and people, we had the entire sky to ourselves.  We saw some blazing streaks of light, but the most spectacular was watching 2 shooting starts go right through the cup of the Big Dipper!  If you've ever star gazed, you know the feeling of being such a small part of the universe.  It felt like God was all around us as we watched the night sky (or was that because we parked in the church parking lot?)

We finished boxing up items in the 'scary room' to go downstairs into the basement.  During the process of reviewing this information, Mike found out some things he didn't know about his dad's military service(received the bronze star) and his work as an apprentice in watch repair.  He shared these findings last weekend with his good friend Kevin, and they enjoyed reminiscing about 'old Joe'.

I have been loving my foray into decorating in the 'scary room' and transforming it into my own space as a study/hobby room.  I decided to be bold with shades of orange(think Sedona), and the room has this great energy and vitality that invites creativity. I am excited to furnish the room and look forward to moving some things from my house soon.  I have high expectations of this room-I hope to write my first book here!  Hmm...should that be an expectation of me instead of the room?  Nope, don't need that pressure!

Mike and Chuck let me join their lunch since I'm 'one of the guys'.  We had a great time talking about everything under the sun including music and inventions.  Mike assures me that this is the normal conversation during their regular lunches; rarely do they talk about their wives.  I don't know if I buy that so I think I'll be scarce during their future lunches. 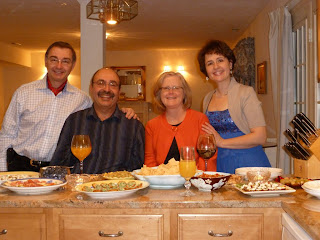 One of the highlights of the week was a birthday dinner party at Atanas and Elena's house.  Over some great food and wine, we had a chance to reconnect with old friends and meet some new friends.  Although I am in the minority in these gatherings (only person who is not an engineer, biologist or professor and doesn't know about plant shutdowns, clinical trials or regulatory approval), I don't let that get in my way. It's amazing what we have in common when there is the opportunity, time and energy to explore.  I am enjoying meeting new people and getting excited about the permanent move to Mike's neck of the woods.

With the holidays behind us, we are getting ready to resume work on my house.  We are excited to get it moving again but somewhat daunted by the volume of work.  It will be an adjustment to be back in my house after 3 weeks away.  I'm starting to view my house as a construction zone, and Mike's house as our home.  I think the mental shift of moving  is already underway.