Variety is the spice of life!


There's a saying in Indiana, "if you don't like the weather, don't worry, it will change soon".

Seems like this also applies to life.  No time to get bored because there is a lot of variety and things inevitably change.

It's been almost 4 years since I retired, and I haven't been bored yet.


2015 seems to be a hamster-wheel of activity, and July is no exception. Busy.

We spent July 3rd with friends at a local microbrewery, Redemption Alewerks.  One of our friends  retired in January and recently became a part owner.

And you really can't go wrong with  fun, food, and great beer including Atonement and Salvation.


July 4th found us checking out a new restaurant in downtown Indy with my sister Angie and her family.

Georgia Reese's is known for Southern cuisine, and they fried chicken and waffles were a hit!

And of course I had to try Mike's shrimp and grits and  chocolate cake and an amazing whisky cocktail.  And yes, they were all fantastic!


We headed home after dinner to enjoy our town's fireworks from the front porch of our house.   We love sitting outside watching the activities without driving anywhere... 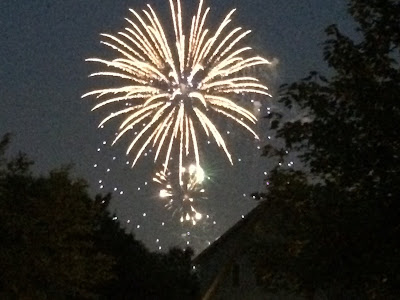 On July 5th we headed downtown for our first-ever Segway Tour... .

Yes, I am a self-avowed klutz.

And NO, I did not wipe out on the Segway.

We had a blast taking a tour of the downtown canal.


Later that evening we went to dinner and a John Fogerty concert with our friends Brian and Stacy.

The concert was held at the Murat which is a beautiful historical venue.

We thoroughly enjoyed rocking to John Fogerty's Creedence Clearwater Revival hits!  It was an amazing concert! 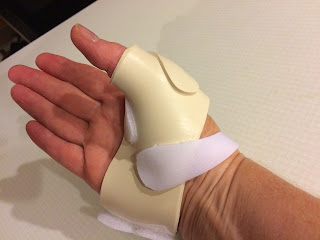 Next was the reality of a couple of doctor visits...

Yes, that's my hand.  And NO I did not fall off the Segway.

It's called arthritis at the base of the thumb and involves a splint and an excruciating cortisone shot.  And possibly surgery down the road.

Never heard of it before last Monday, but the doctor said 50% of women over 50 get this type of arthritis. Who knew?

And my nephew Dane and I snuck a quick "selfie" at the Sleep Clinic while waiting for Mike's appointment.

We were playing Scrabble, and a few funny words sent us off into gales of laughter.

I'm surprised we did not get thrown out...


Later in the week we had a wonderful visit with my niece Diane and her family.


And I crashed a lunch that Mike was having with our friend Chuck at the Alley Cat in Broad Ripple... 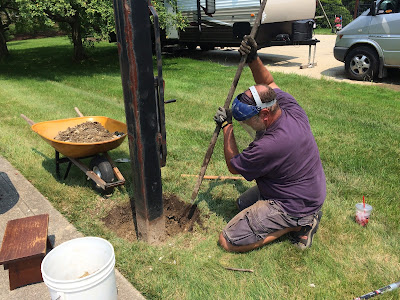 And somehow I forgot to mention that Mike and spent 6 plus hours removing a basketball goal from the side of our driveway.

Since we don't play basketball, this goal has always been a hazard when you are backing up.

Lots of digging and a Jeep Wrangler Rubicon proved too much for the basketball goal...


And as you might expect, I want to end with a quick glimpse into the beauty of Summer...