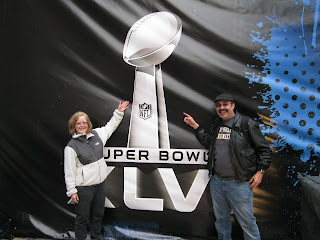 What a great week to be in Indianapolis!  It's been a whirlwind starting last Sunday when we spent the day at Lucas Oil Stadium putting seat cushions on 50,000 seats.  As I mentioned in my last post, it was a great opportunity to volunteer for the Super Bowl and help a children's charity. 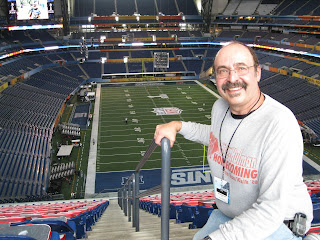 One warm afternoon we met up with our friends Kevin and Kathy, and we headed downtown to experience the Super Bowl village. We arrived at Super Bowl Village and began walking through a 3 block area of stages, food, zip lines and thousands of people.  There were 4 zip lines across Illinois Street, and it was a blast watching people screaming overhead while they enjoyed this ride.  We decided that being spectators was ok versus getting in line at 5 am to buy tickets. 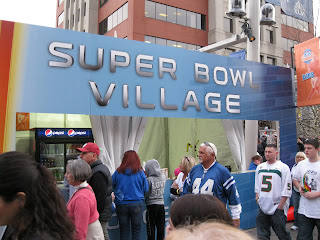 The local bars and restaurants were hopping, and the media was set up at various places throughout the village.   We enjoyed watching an ice sculpture demonstration by the Ice Gurus.  They created an amazing sculpture a football encased in ice, but all I could  think was "what is wrong with this picture... chain saws and ice?" 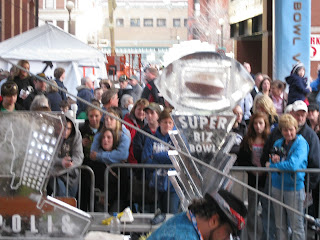 We did some shopping for Super Bowl souvenirs at The Huddle, which was an eating and shopping area set up inside the Circle Center Mall.  We enjoyed great food and drinks along the way, and although expensive (as all the local residents complained) it was worth it!  Did I mention the absolutely great weather? It was in the low 50's which is unheard of for the first of February in Indy. 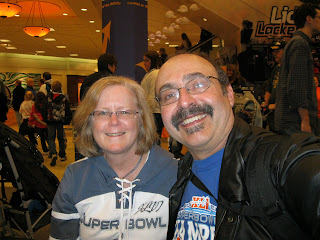 Mike and I headed back to Super Bowl Village the next evening after a day of moving furniture into my new study. We wanted some quality time together, and we ended up sharing the time with 150,000 other people who were downtown.  We went to the Darius Rucker concert and enjoyed some great music outdoors on a beautiful evening.

We enjoyed walking around and getting some great photos of the city all decked out for the Super Bowl.   It was amazing to see the Marriott Hotel covered by a Super Bowl Sign. 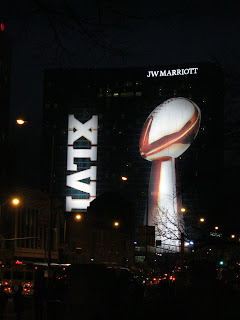 The Circle Center was beautiful at twilight.  This area was also home to the theatre where Jimmy Fallon hosted his show several nights this week. 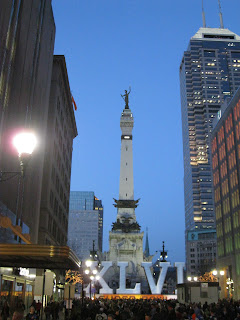 It's been a great week to be in Indy!  We were fortunate to be able to volunteer and participate in the events leading up to the Super Bowl.  We've had a blast, and we haven't even watched the game yet.  Tonight we head to a Super Bowl party at our friend Brian's house.  Go Giants and Eli Manning!  Like most people in Indy, you have to root for any team that plays against the Patriots.  And I used to say that I didn't like football.  Holy cow, what has happened to me...