Life is not dull!  And it's only Thursday...

The craziness started Sunday evening when Mike & I returned from a neighborhood bike ride to find flames shooting out of a huge tree in my neighbor's back yard.

After a quick 9-1-1 call, the local fire department came racing into the neighborhood.  Nothing like a few fire trucks, an ambulance, a pumper truck and the fire chief's truck to bring out all the neighbors on a lazy Sunday evening.


Before the firemen finished their work, my neighbor arrived on his motorcycle.  I saw him walking with the fire chief into the backyard to survey the damage.  He phoned me later to thank me for calling the fire department.  He said he had lit a small fire earlier in the afternoon, and when he left the house, the fire was smoldering and almost out.  Sounds harmless unless you consider in the 20-30 mph winds...Mike and I later talked about all the Smokey Bear messages, and we both shook our heads ...

GOOD NEWS IS...The Ankeny Fire Department responded quickly and soon had the situation under control. No one was hurt.  My back garage and woods were not damaged!

After such an auspicious start to the week, I went into Monday dreading my 6 month mammogram.

As I met with the oncologist later Monday morning, he asked if I was having any side effects from the drug called arimidex(estrogen killing drug you take for 5 years after breast cancer).   In my typical fashion, I asked him a question about what the side effects were.  When he mentioned joint pain, I spoke up and described some of the hip pain I've been having.

Note to self:  Be careful of what you say to your oncologist!  Next thing I know I was scheduled for a bone scan on Wed. morning.

The bone scan procedure was painless.  They inject you with some nuclear stuff which settles into your body over a 3 hour period.  Later later they slide you into a large donut-shaped machine that takes pictures of your entire skeleton.

Second note to self:   be selective what you read online about a medical procedure.  I was a wreck between Monday and today when I learned how a bone scan can indicate the spread of cancer.

As if a fire, a mammogram and a bone scan wasn't enough... 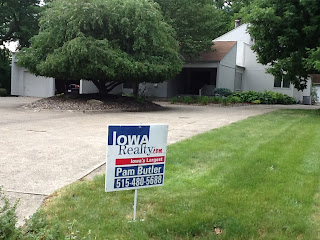 the painter is here this week

the new refrigerator was delivered yesterday

our house went on the market today

and we booked a trip to Ireland in the Fall!

And who ever said life was dull????