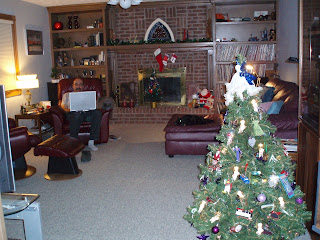 Like most folks, it's been a busy holiday season.  Mike and I are blessed this year to be in one house in one city which gives us lots of time to spend with family and friends. And that's what we've been doing.


We toured the Fischer Theatre in Danville, Illinois where Mike watched movies as a kid. It's on the National Historic Register and will take millions of dollars to restore, but it wasn't difficult to imagine this building in its' heyday.

The theatre is said to be  haunted, and when Mike's friend Jake gave us a tour under the stage, it seemed about 15 degrees colder than the rest of the building.  I don't know, something about being led on an underground tour with flashlights and cell phone lights made me a bit nervous...

We also attended Jake's book release party at the local library.  I am reading one of his books now, an historical fiction book about D.B. Cooper.  He is an up and coming author, and this year one of his books was a runner up for a national book award and is being considered for a movie.

We celebrated my mom's 81st birthday at our house...

and baked cookies with sister Pam and niece Alex.

We visited my niece Diane and her daughter Alice.

We attended the Indiana Wind Symphony's Holiday Concert and enjoyed our friend John playing percussion.  We planned to hook up with our friend Ed and his daughters after the concert. Imagine our surprise when we realized they were in the seats right next to us, and other friends were in the seats in front of us.

And I joined in the final "Boys Night Out" dinner of the year at a local dive called The Red Key.  Hey, you can't go wrong with chili and cheese burgers!

And a Chicago weekend with Kevin and Kathy to see the Christmas lights was derailed by our first blizzard. Funny how snow and 50 mph winds can convince you to stay put in your own home.  We made the best of it with a movie, great meals and shopping.  For the first time I watched an Iowa blizzard from a distance, and it felt really weird.

So the gifts aren't wrapped yet, and there's lots of cooking to do for Christmas, but hey there are a couple of days left for all of that.  We wouldn't trade a single moment with family and friends...