Life as we know it

A friend recently commented that my blog is "all over the place".  I call it "life as we know it".

Fall is in the air!  It's been simply lovely with blue skies, cooler temps and of course mums.

In August of 2012 we went on a Jeep Jamboree trip where we took our Jeep Wrangler Rubicon off road for several days through the beautiful wilderness.  During this trip I won a set of Bushwacker Fender Flares.  Ok, I must admit that when I got the gift certificate for the fender flares, I had no idea what they were...

After waiting almost one year we finally ordered them (the certificate expired end of August 2013).  And as you might expect I wanted them on the Jeep right away so Mike jumped into action and installed them.


Last weekend we enjoyed a bit of Ireland at the Indy Irish Fest.

My sister Pam and brother-in-law George came over for the weekend, and we enjoyed fantastic music by the Fenians and the Elders.

And we were compelled to partake of Irish Stew, fish 'n chips and maybe more than a few Smithwick's beers....

And the gardening theme continues...

We picked several plastic grocery bags full of jalapeno and habanero peppers from Uncle Nick's garden.  Mike traditionally cans them, and this year I got in on the act.

First Mike made some new tools to clean the peppers.  A trip to Goodwill yielded a couple of spoons that he cut and filed into shivs.  Though most often used in prison breaks, we found these worked great for cleaning the seeds out of the peppers.


And I learned that safety is critical!   We cleaned the peppers in the garage because of the intense fumes, and we wore 2 pair of rubber gloves to protect our skin.

And when Mike worked on the habaneros, he wore a face shield.  What can I say?  We live on the edge!

Hopefully we are well-stocked in peppers for the coming years.  If you have any recipes that use jalapenos or habaneros, please send them my way...

And I enjoyed hanging out downtown with my sister Pam... 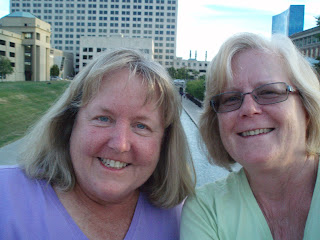 Hope you are having a fun week!
Diane
Posted by Diane at 3:09 PM