We took a road trip to Chicago in early January to see the holiday lights.  Ok, the trip was originally planned before Christmas but got snowed out.  So, my sweetie and I headed north on I-65 to the Windy City shortly after New Year's Day.

It was cold and snowy and bleak, but that didn't slow us down.  We were on a quest to explore the city!    From Water Tower Place to Michigan Avenue to Andersonville, we saw the sights...

We enjoyed lunch at a little Italian restaurant called Rosebud on Rush.  Next we headed to the hotel a block off of Michigan Avenue and were pleasantly surprised to be upgraded to a corner suite!  Hey, if this is a sign of things to come in the new year, I'll take it!  We were amazed at the view from the 33rd floor from Lake Michigan to an ice skating rink on top of one building to 2 large cow statues on the top of another.  They were on some type of grass roof...hey, I couldn't make this stuff up!

We stopped at the adjoining Irish Pub for a couple of drinks to fortify us before some shopping.  Next we headed to Michigan Avenue and our first stop was Tiffany's.   Got to say that I love that place, and Mike surprised me with a beautiful necklace as a late Christmas gift.

Next stop was Water Tower Place which was still decorated for the holidays.  It was magical! And have you ever been in a Lego store?  Somehow Legos have come a long way from the tube boxes of Legos we had as kids.  The storefront was an amazing city scene! 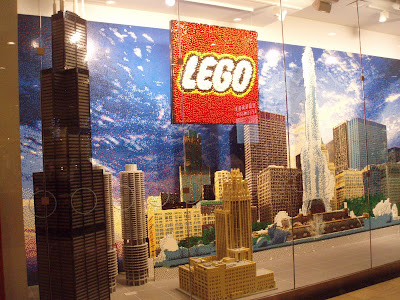 And then there all these bins of different color Legos.  Who knew?


We bundled up and headed out for a long walk along Michigan Avenue to see the city lights. And they didn't disappoint...

The next day we headed North to Andersonville which had its' origins as a large Swedish town.  Nowadays it is a diverse community with beautiful old townhouses, lots of antique shops and eclectic restaurants.  We ate at a wonderful Persian restaurant with flat bread "as big as your head".  And we acquired a great antique bench which Mike squeezed into my Tiguan alongside the luggage and winter gear.

And we finally headed towards home at night fall enjoying a final view of the city. 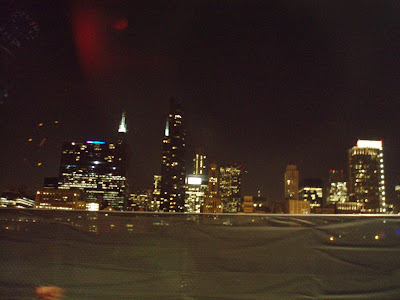 After a busy holiday season, it was a great to have some time just for us!  It was a refreshing and fun start to the new year!