During the 1980's, the Indiana license plate included the slogan "Wander Indiana".  So by way of Illinois, that's what we've been up to...

We first spent a couple of days in Illinois visiting friends Kevin and Kathy.  Mike helped Kevin move a recently purchased antique record  player, and we spent hours watching their kids and grandkids splash about in pool.

The next day we returned to Indy on the back roads.  First we stopped at the Eugene Covered Bridge, built in 1873 over the North Vermilion River.  It is on the National Historic Register and was closed to traffic in 1974.  It's a great example of the many covered bridges in Central Indiana.

Next to the bridge was this cute little restaurant called the Covered Bridge Restaurant.  In addition to good home cooked meals of chicken and noodles and fried ham steak, we selected Raspberry Pie out of about 20 varieties, and we were not disappointed!  We had a great view of the flower garden while we dined.


We drove through Ladoga, a small town with some beautiful "painted lady" Victorian Homes.  We definitely need another trip here to wander around the town and take pictures of these beautiful homes. And we drove around the edge of Shades State Park on a beautiful hilly, tree-lined road.   We will need to head back there for some hiking.

And on some of the country roads, we found a few interesting things that caused us to turn the car around for pictures.


We also had the opportunity to wander through our storage unit, attic and basement to find items for our first ever garage sale.  We joined in the neighborhood garage sale on Saturday on one of the hottest most humid days of the year.  Ours was probably a bit unique in that we had a wide range of items for sale from furniture to speakers(set up and running courtesy of Mike...would you expect anything less?) to a Corvette car cover to an electric blankets to a train set. 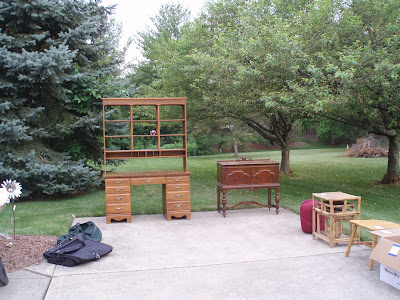 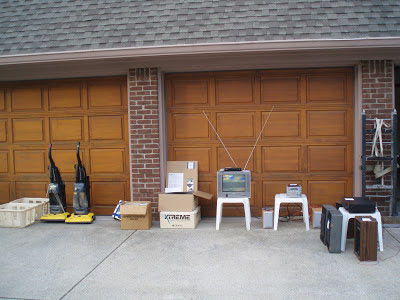 We were fortunate to get rid of some stuff and make some money.  And after the sale we drove the remaining items straight to the local Goodwill Store!

And I'm contemplating writing a book on the psychology of people shopping garage sales.  We had some interesting experiences including meeting new neighbors, getting invited to a party by some people who just moved to town to me getting a bit angry at some hard ball price negotiations!   I mean SERIOUSLY?  Someone expected me to drop my price from $10 to $2 on the Corvette Car Cover just because there was a dead mouse inside.  No way!  That just made me mad!  I wouldn't sell anything to that person, which is why the item was later donated to Goodwill.  Ok, possibly I should include a chapter on my own crazy behavior in that book!  And maybe garage sales should not be my next career...

Hope you are having a great week!
Diane